In my last post, I outlined an experiment to predict the S&P 500 index using past price and volume history. In this post, I will present the results of that experiment.

The experimental approach is illustrated in the following diagram:

The above sequence was run 5 times, resulting in 5 separate predictions. The table below provides the additional relevant parameters used in the experiment.

*These are the 250-day moving average normalized predictor values (where value = current value / 250-day moving average). ** These terminals represent the latest close and volume values. These terminals could alternatively be discovered by the corresponding functions (and almost certainly would), but I believe it makes sense to include these as they are important and frequently used metrics in quantitative analysis.

The results of the five experiments are display in the following table:

The next chart shows the performance of the best testing program found in each of the 5 models over the testing period.

The next chart below shows prediction performance. While none of the five models beat the index over that period, the best performing testing model (#2) also did better than the other models in the prediction period, indicating this model may have some predictive value worthy of further analysis. I’ve attached the best performing testing and prediction programs found in the five models. In a future post, I may analyze these programs further, as it is not always obvious what they are doing from a glance. 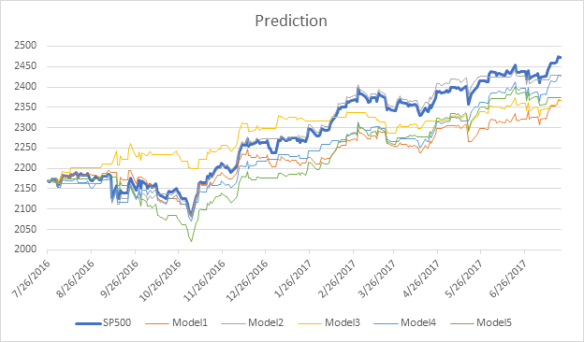 The next table looks at the number of days in and out of the market versus overall return.

There appears to be a linear relationship between days in and overall gain. This is somewhat expected in a rising market situation like this where the only investment choice is being long or flat.  Note that three of the models, even the poorly performing model 3, achieved a higher return compared to the benchmark per day invested.  This result is summarized in the final column, which shows three out of 5 models beating the benchmark on return per day invested. This is show in the chart as these three models are above the trend line.

In this experiment, I had little basis for most of the parameters chosen, other than my belief that these would be a good starting point. A further study of parameter optimization is needed to determine how the overall model performance changes as each parameter varies. It is best to modify a single parameter at a time and see where improvements level off as the value changes.

I also only looked at the two most popular predictors: past price and volume. It is likely that other possible predictors, such as interest rates, may the better indicators during certain times. Additionally, we can include short selling in the mix, partial investments, or multiple investment instruments, as one would do with a real-world portfolio.

When elaborating on this model, it is important to avoid continually modifying the parameters until we find a set that performs well on the target prediction period (i.e. data snooping). Final prediction must always be done on data not yet seen.

This experiment was only the first of many steps needed to find profitable prediction models. In the next several blog entries, I will study how changing model parameters can affect performance and hopefully improve on this experiment.

Of course, it is possible that we can’t do much better than the results achieved, assuming the returns over the target period were essentially random. This is somewhat indicated by the fact that the relative performance achieved is in close proportion to the percentage of time invested.

There'll come a time when all of this is over
Something else will grow and take it's place
The brand new car: scrap metal in a junkyard
The children playing will grow up and leave home
Put it away this dream you can't stop dreaming
Put it away this anger and desire
The open road is infinitely hopeful
Take all those memories and throw them in the fire