In prior posts, I showed that genetic programming could be used to fit an expression to a set of experimental data. This technique is know as symbolic regression and is used to model the underlying data generating process (DGP) describing observed data points. A series that was easily modeled is show again below

The underlying DGP is described by the equation :

In that experiment, genetic programming did a good job of approximating this series, with a final mean error of 0.012.

But what happens if the DGP changes, either abruptly or gradually, over time? Financial series are known to exhibit this behavior. For example, the following chart of the S&P 500 before and after the financial crisis in 2008. The underlying factors before and after the crash and during the subsequent recovery are likely quite different.

An example synthetic (made up) series that exhibits structure breaks, or regime change, is the following:

This series is represented by the equation:

Taken separately as two (or possibly four) individual series, GP would easily find the correct solution to each. But without a way to break the series up, GP does not perform very well. Using the same parameters as in the prior experiment, GP finishes the run with an average error of 1.71, compared with an average error of .01 for the (slightly more complicated) series in the prior experiment.

The final regression achieved is shown in the following diagram:

The video is shown below.

A risk in including autoregressive functions is that the prediction can converge early to a random walk prediction, where the predicted value is simply the prior value. One way to avoid this is to not allow expressions that evaluate to the prior value. While this may be cheating a bit for this series, autocorrelation functions are requirements for chaotic series and likely required for financial series.

For these three functions, the offset periods are determined through evolutionary operations.

The following run uses the same parameters as the prior run along with the inclusion of the additional primitives.

and a video of the run is shown below.:

Notice the prediction immediately converges on a somewhat trivial prediction but adjusts and improves over time. The diagram below shows the results after one generation. The function shown is the equivalent of y(t)=y(t-1) +1.

The final result does a bit better, with an average error of 0.31, and is shown in the diagram below. Still, the result is not as good as what can be achieved on similar series that don’t contain structural breaks. 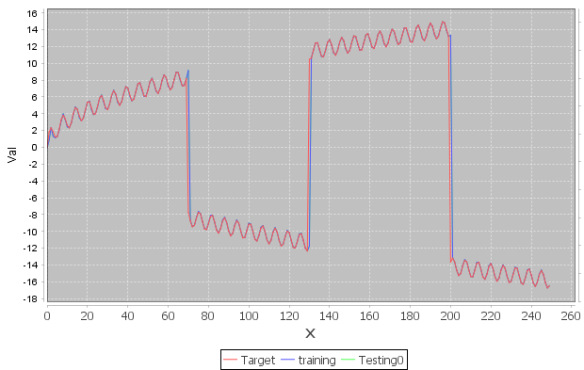 An analyst looking at this series might notice that it is broken up into either two series or four similar segments. Therefore, he might choose to run different models on each section and take each prediction individually. In fact, this is often how regime change is handled when modeling financial series*. However, forcing the analyst to choose the appropriate time window for analysis limits the potential automated solutions (Wagner et al., 2007. P.2).

An alternative approach that I developed in my PhD dissertation automatically infers regime boundaries and allows the development of distinct solutions for each regime. Using this technique, the run converges to the exact solution (ignoring some rounding errors) after 26 generations. The final (correct) solution is shown below.

The black line shows the inferred regimes, as indicated by the right vertical axis. In this approach, different expressions are automatically generated for different regimes. Regime boundaries are determined through typical evolutionary operations.

I will discuss this technique, which I named “automatically defined templates”, further in future blogs. For now, you can see my PhD dissertation for additional information.

* Two econometric methods, threshold autoregressive model and the Markov regime switching model, consider regime change. Both approaches break the time series into two or more separate series, one for each regime, and apply traditional modeling techniques, such as ARMA, to each independently.